ROBERT THORNTON produced a sensational upset to stun Phil Taylor and win the Speedy Services UK Open on Sunday night, defeating the world number one 11-5 at the Reebok Stadium in Bolton.

Taylor had appeared on course to win a fifth title in 'The FA Cup of Darts' when he powered past Terry Jenkins and Denis Ovens in the latter stages on Sunday. 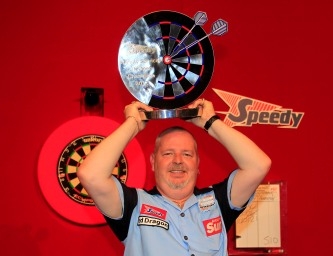 But after taking a 2-0 lead in the final, he had no answer to an inspired barrage from the Scot, who won nine of the next ten legs and hit six 180s in the process of moving 9-3 up as Taylor missed a total of 23 darts at doubles.

The Stoke great hit back to 10-5, but was unable to prevent Thornton from sealing victory in only his second major with a 121 bullseye finish, as he followed up his 2007 World Masters win by taking the £40,000 first prize.

Robert Thornton — Speedy Services UK Open (Lawrence Lustig, PDC)The triumph — which followed his earlier wins against Mark Webster, Gary Anderson, Dennis Priestley, Wes Newton and Dave Chisnall — will kick-start Thornton's career, with the Scot having spent two months sidelined last year as he recovered from a bout of pneumonia, and also returns him to the world's top 32 after he had slipped down the PDC Order of Merit.

«It hasn't sunk in what I've done yet,» said a delighted Thornton. «When I won the World Masters in 2007 it was a great achievement but to beat Phil Taylor in a televised final is a very special moment in my career.

»Phil did miss quite a few doubles in the middle of the game and I managed to take the chances that were on offer to me."

Taylor's defeat was only his sixth in a major televised final during his incredible career, and his first in a decider since losing to another Scot, Gary Anderson, in the 2007 World Darts Trophy.

«Robert deserved to win,» said Taylor. «I missed a lot of doubles but Robert was the better player.

Phil Taylor — Speedy Services UK Open (Lawrence Lustig, PDC)»He's come through an incredibly tough draw and beaten the likes of Mark Webster, Gary Anderson and Wes Newton along the way to the final, so that shows he deserves this title."

Taylor kicked off the final in amazing fashion by taking the first two legs in 11 and 12 darts respectively, with Thornton hitting a 180 in each only to see the Stoke ace finish 87 and 44.

Taylor missed ten opportunities for a 3-0 lead to allow Thornton to sneak the third on double one, before the Scot produced a fantastic 11-darter to level the match at two-all.

Taylor replied with a 180 in a 12-darter to win the fifth, but Thornton landed his third maximum of the game in leg six we he levelled with a 13-darter before he broke throw in leg seven on tops to lead the match for the first time.

Thornton, the 2007 World Masters winner, converted an excellent 106 checkout in the eighth leg to move two legs clear of Taylor at 5-3, before finishing tops for his sixth leg and back-to-back 14-darters as he edged towards his first major PDC title.

He then won his seventh successive leg to move 9-3 up after Taylor missed three darts at double 12, before the Stoke star won his first leg in eight by converting a 93 finish for a 12-darter.

Thornton then hit double ten to move a leg away from victory, before Taylor landed double five with his third to keep the match alive at 10-5.

Phil Taylor — Speedy Services UK Open (Lawrence Lustig, PDC)Taylor fired in a 174 in the next leg, but two 140s had given Thornton the edge and he crossed the winning line in emphatic style by finishing a superb 121 checkout on the bull to take the title.

Thornton's win sees him move from 34th in the PDC Order of Merit back to 23rd, and he admits that the win is a huge boost following the bout of pneumonia which affected him in the second half of last year.

«The pneumonia knocked me back a fair bit,» added Thornton, who turns 45 next month. «I was out for a couple of months, but with the support of my kids and my grandkids I got back on my feet and playing again.

»They lifted me and they didn't give up on me, and I wasn't going to give up. I hope this is the start of good things again for me now.

«I was 13th in the world a couple of years and I want to get back there and higher!»

Thornton enjoyed a fine semi-final win over Dave Chisnall, who improved on last year's run to the quarter-finals by reaching the last four this time around, but he was unable to repeat the heavy scoring which had helped him see off Raymond van Barneveld earlier on Sunday.

«I'm very disappointed with the semi-final,» said Chisnall. «Robert played very well and deserved to win, but the darts didn't go for me.

»The atmosphere was buzzing and I loved it, and I am pleased to have reached the semi-finals in my second year here. I'll put it behind me and start again in the Players Championships in Birmingham next weekend."

Denis Ovens was the other losing semi-finalist, as he reached the last four for the third successive year in Bolton before losing 10-2 to Taylor.

The Stevenage ace has been battling with Thoracic Outlet Syndrome since having to withdraw from the Ladbrokes World Darts Championship with a back problem last Christmas, but admitted: «There's disappointment with losing to Phil but it's mixed emotions for me.

»Three months ago, I hadn't qualified for the UK Open and could hardly throw a dart, so to come here and reach the semi-finals again is great.

«I seem to love Bolton. I rode my luck a bit against Brendan Dolan and Paul Nicholson but I wasn't good enough against Phil. I enjoyed it but the way he started off didn't leave me with much chance.»
Нет комментариев
Только зарегистрированные и авторизованные пользователи могут оставлять комментарии.
0 подписчиков
0 отзывов
7 топиков