ANDY HAMILTON and James Wade snatched the final two places in the McCoy's Premier League Darts Play-Offs on a dramatic final league night at the Metro Radio Arena in Newcastle, as World Champion Adrian Lewis and Raymond van Barneveld crashed out of the tournament.

Hamilton's 8-1 win over Kevin Painter in their decisive clash saw the Premier League newcomer earn a top-four place in his debut season at the expense of Stoke rival Lewis, who lost 8-6 to Simon Whitlock in Newcastle. 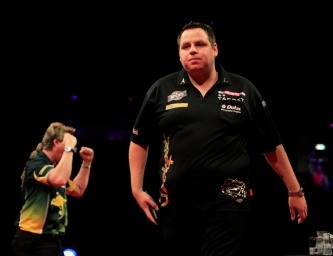 Thoseresults meant that Whitlock — who came from 4-1 down to take victory — finishes second in the table and now takes on Hamilton in the semi-finals.

«I was already in the semi-finals but I wanted to win tonight to make sure that I avoided Phil Taylor, so I'm over the moon to have done that,» said Whitlock.

«The McCoy's Premier League this year has been the hardest ever, so I'm delighted to have finished second but I've got two steps left now; to reach the final and then go on and win it.»

Hamilton had found himself bottom of the table after six weeks, but has lost just once in eight games since since — when he missed a chance to draw with Taylor — in claiming a place at The O2.

«I'm absolutely delighted to have qualified and I feel privileged to be in the top four out of the eight best players in the world,» said Hamilton.

«It's been an amazing second half to the season, I'm grinding results out and taking my chances. Whatever happens now is a bonus for me but I'll keep fighting next week against Simon.»

Hamilton's third place was secured when Wade hit a 13-darter in the deciding leg of his clash with van Barneveld in the night's other decisive game.

The Dutchman had to win to jump above Wade and into the semis, and led 4-2 before Wade took four successive legs to move in front.

Van Barneveld hit back with a 161 finish in taking a 7-6 lead, but a 13-darter from Wade in the decider saw him dramatically edge into the top four, and he now plays league leader Phil Taylor in the other semi-final next Thursday.

«It was a hard game and Raymond played well, so there's a massive sense of satisfaction to be in the Play-Offs again,» said Wade.

«I'm looking forward to playing Phil in the semi-finals. He seems to do something special against me every time we play so I know the size of the task, but I'm being positive about it.»

Taylor ended the league season eight points clear at the top of the table after drawing with reigning champion Gary Anderson in the night's other game, with the Scot finishing with a point but ending the defence of his title at the foot of the table.

«I wanted to get a win and hit a massive average but it wasn't to be — it was a bit like a sparring session ahead of the Play-Offs,» admitted Taylor. «The other guys were all on edge tonight and there was a lot of pressure, but we can all focus on the semis now.

»I know I'm in for a tough game and I'll be getting ready for James. When I beat him in the final, I won 10-8 and hit two nine-darters because he's such a good player that I know what he'll do."

The Play-Offs at The O2 in London next Thursday will be accompanied by the final of the PDC Unicorn World Youth Championship between Dutchman Michael van Gerwen and Norfolk's James Hubbard, as they battle for the title previously held by Arron Monk.
Нет комментариев
Только зарегистрированные и авторизованные пользователи могут оставлять комментарии.
0 подписчиков
0 отзывов
7 топиков